I was born and grew up in Barbados in the West Indies. My dad was a white American shrimp fisherman (think Bubba from the film Forest Gump) and my mum was a young languages graduate from England teaching overseas straight from university in a girls’ school there. The shrimping business was good back then and my dad was relatively wealthy. We had maids. Rita and Allenby. They were, of course, black Bajan.

I was born into a structure and system in which I had all the power and privilege from the get-go. It was still colonial. But – apart from heartfelt and awkward teenage socialist angst at the idea that I’d grown up in a house with “paid help” – I rarely, if ever, gave the idea of privilege much thought. Or even recognised that I was privileged at all. Instead, I was the kid who came home with his single mum, together with his little sister, to live with his grandparents in the UK when things didn’t quite work out between his mum and dad. If anything, I was the one hard-done-by. Right?

And even if I had been made to recognise and engage with my privilege, I would never have been prepared to enter into a conversation about how that privilege went hand-in-hand with a deep and unacknowledged racism. “Me? Racist? Not me!”

But that’s the problem.

None of us thinks we’re racist. Racism, we think, is the domain of those to the far right of wherever we stand. Right?

Racism is every white person’s issue. Because we live in a society that is structurally racist. I’m old enough to remember the murder of Stephen Lawrence, and the inquiry that followed. The phrase “institutionally racist” haunts all of us in Britain still. Because we all knew then and know now that the indictment didn’t just apply to the Metropolitan Police Force. It was our collective white sin.

In the early nineties, as a twenty-something adult, I went to visit my dad for the first time, then living back in the southern States. I remember being shocked by the casual, passively-aggressive racism of his friends and associates there. For a long time after, I displaced my racist frame-working onto the American south. That’s where it lived still, I told myself. Among the genteel, hospitable, but deeply racist people of the southern states of the USA.

I was still avoiding the elephant in the room.

Years later came a session at Greenbelt in 2016 curated by Sekai Makoni, The Lemonade Effect: Black Power and White Discomfort. A vital and necessary attempt to ask white Greenbelters to notice our deep-seated and unacknowledged privilege and racism. Many white festivalgoers, including me, cite this session as seminal in their Greenbelt experience of recent years. But for Sekai and others involved it was a difficult – even traumatic – experience. The mantra that came back at them in the session was the same as my internal monologue had been growing up: “But I’m not racist!” Sekai and the panellists faced a barrage of well-meaning political correctness and assumed inclusivity and as a result were not afforded the common courtesy of simply being listened to.

And so the complicity continues – as we white liberals continue to fail to see that there is much in us that remains un-deconstructed.

So many conversations and initiatives emerged from that ‘Lemonade’ session… as have so many in the wider British context following the publication of Reni Eddo Lodge’s seminal book Why I Am No Longer Talking to White People about Race.

At Greenbelt this summer, we are hosting a Windrush-inspired communion service, which will endeavour to place black British identities and experience front and centre in our main act of worship. Building on services over the last two years which have both looked at inclusion – through the eyes of children in 2016 and focussing on those with additional access needs in 2017 – we want to host a service which addresses the ways in which we have allowed white privilege and racism to exist in our country, in our communities, in our churches and, yes, at Greenbelt (in more and less subtle ways). We want to host a service that goes beyond inclusion and towards justice.

The idea for a service like this was seeded some years ago, and conversations about it were often met with people of colour sucking through their teeth and advising us against trying. But then I talked to Professor Anthony Reddie and met with Revd Dr Michael Jagessar, both of whom were enthusiastic and encouraging. Subsequently, I met with many others wrestling with the issue of racial justice – Dr Elizabeth Henry, for example, who heads up BAME engagement for the Church of England.

It was a talk that Dr Elizabeth gave – when she mentioned that walking into churches she almost never came across images of people who looked like her – that inspired Greenbelter and artist Meg Wroe to re-make Rublev’s famous Trinity icon (pictured below), featuring people of colour from her local community. And both Elizabeth and Meg are part of an ongoing group for whom the ‘Lemonade Effect’ panel at Greenbelt still reverberates. 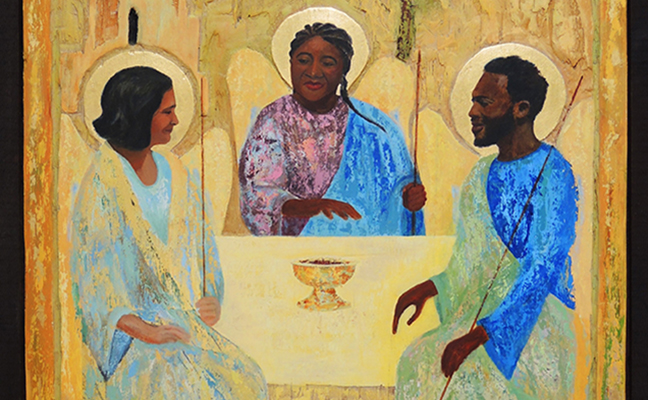 I am really excited at the prospect of this year’s service. Soul Sanctuary Gospel Choir will be leading our singing and the music. Broderick Greer and Winnie Varghese will be involved (among many others) and there’s lots in store that I’m sure will inspire all those of us who will gather together on that morning. The question I hope the service will provoke in us is: how do we self-consciously acknowledge our own white, middle-class privilege and – as an event and in our churches – how do we open ourselves up to making spaces that are more diverse and inclusive? Spaces that are not only racially inclusive but which pursue racial justice?

And it’s not just in the communion service. We will be helped across the weekend in the wider programme by thinkers, writers, leaders, activists and artists including Robyn Travis, Winnie Varghese, Broderick Greer, June Sarpong, and Anthony Reddie, among others, as we welcome more people of colour than ever to be part of the bill this summer.

This isn’t about being politically correct and ticking the boxes, but about opening ourselves up to the gifts and wisdom and creativity of the whole community. It’s about trying to really listen. And then reflect, without jumping into defensive mode. We have a lot to learn… and a lot to celebrate. We need to move beyond just inclusion, beyond just involving people of colour. Greenbelt and Greenbelters need to engage in acts that promote racial justice in the world.

We will feature a blog or two in response to this – and to develop on this – from one or two black Greenbelters in coming weeks.

This will be a journey, an ongoing process of discovery, deeper self-awareness, confessions, and ongoing privilege-checking.

We would also pay tribute to Professor James H Cone, the initiator of academic Black Liberation theology, who died in April this year.