We’re beyond excited to reveal that Russian activist-artists Pussy Riot will be in residence at Greenbelt this summer – an English festival exclusive. Ура!

Booking them has been a real adventure. Here, Paul Northup, Greenbelt’s Creative Director, explains how, and why, it happened.

I’m writing this blog on Monday 19th March 2018, the morning after Putin won his fourth term (of six years) in office as Russia’s president. And in the UK, we’re shivering our way out of yet another icy blast of the Beast from the East. Both are visceral reminders of just how powerful Russia feels right now – even at this distance.

There’s a chill in the air alright. From cyber-warfare to electoral and chemical interference and espionage, and from the upcoming FIFA World Cup to its involvements in Crimea, Ukraine, and Syria. All eyes are on Russia. People are asking whether we’re entering a new Cold War.

At school, I remember reading ‘One Day in the Life of Ivan Denisovich’ by Aleksandr Solzhenitsyn. It told the story of one ordinary prisoner in the Soviet labour camps of the 1950s – one of the first public expressions of the repression in Stalinist Russia (for which Solzhenitsyn was expelled from Russia to live his later life as a dissident). And I was reminded how I’d felt reading that book as a teenager when I watched Armando Iannucci’s bleak and hilarious film The Death of Stalin last year.

That was then. This is now.

But prisoners of conscience are still being sent to these prison-cum-torture camps today. Prisoners like the three women from performance art-protest group Pussy Riot, who were sentenced to serve two years in 2012 after their infamous punk prayer protest in Moscow’s Cathedral of Christ the Saviour on the eve of Putin’s 2012 election.

The Beast from the East brought us air all the way from the Urals and Siberia, where the Russian State still sends its political prisoners to its penal colonies. And the witness of Pussy Riot reminds us that repression and silencing are still alive and (un)well in Russia today.

One of the three Pussy Riot members imprisoned in 2012 was Maria Alyokhina. Her book Riot Days, published last year, tells the story of Pussy Riot’s punk prayer protest, their subsequent arrest and their time in prison – where they continued to protest on behalf of prisoners’ rights in the face of great abuse, even going on hunger strike on a few occasions.

So, when we drew up a wishlist of who we’d most like to get to Greenbelt 2018 back in the autumn of 2017, Pussy Riot was there – right at the top. Radical, activist, spiritual, feminist, challenging state and church, standing up to the powers that be, railing against the patriarchal status quo, a beacon of inspiration and sign of bravery for those all over the world who want change but perhaps feel too timid to try to make it – that’s Pussy Riot.

We had to try and get them to the festival. But surely they’d never come to Greenbelt – ‘the best festival you’ve never heard of’?

We emailed them. A long and heartfelt email. We chased them. And then, finally, we got a response.

So we poured a cuppa, drew breath and opened the email. They’d received our pitch and were impressed by what they described as our “soulfulness” (we’ll take that). They wanted to know more. They were open to exploring how this might work.

Over the course of the next few weeks, a series of emails eventually led to a long Skype call with Alexander Cheparukhin (musical producer of Pussy Riot’s Riot Days touring show and longtime Russian festival promoter) and Masha Alekhina (one of the key activists in the Pussy Riot collective today) in early January.

A week after the Skype call, Pussy Riot said they’d love to join us this summer.

Over the years (this summer will be our 45th edition), we’ve been privileged and inspired to experience the art and activism of many seminal acts at Greenbelt. Like Australian band Midnight Oil back in the early 90s, one of the first major global artists to draw attention to climate chaos. Like Dame Anita Roddick, founder of the Body Shop and one of the trailblazers in fair, ethical trade. Like Caesar Molebatsi, a young black community leader from Soweto, who came to the festival in the dark days of apartheid in South Africa (while we sang Free Nelson Mandela onsite). Like Israeli refusenik Sahar Vardi, who came to Greenbelt only last year, from a new apartheid context today – that of Palestine-Israel.

These global struggles have become part of our story.

So, while the politicians engage in their usual rhetoric and theatre – standing ‘shoulder to shoulder’, embarking on tit-for-tat diplomatic expulsions, rattetching up the slurs – we’re excited and privileged to welcome engaged, committed and grounded activism from the heart of the Russian story to our festival in Pussy Riot. It’s the latest chapter in Greenbelt’s epic tale of giving a platform to global voices working to create change and bring justice.

Now, some might wonder why Greenbelt – with our roots deep in the Christian tradition, committed to the vision of human liberation as shown by Jesus – is choosing to showcase a collective who, according to the charges brought against them, incited ‘religious hatred’ with their punk prayer Cathedral act in 2012.

But this is exactly the reason why we’re so excited to have Pussy Riot at Greenbelt this summer. Because we’ve always revelled in creating a space that challenges structures and systems that hold back human freedom and flourishing. And we’ve always held our hands up to say that sometimes those barriers come from the church itself. That’s what Pussy Riot were doing on that day back in 2012 – and continue to do today.

Maria Alyokhina considers herself a Christian. Only last year she took part in a demonstration outside Russia’s justice ministry where she joined forces with a prominent Orthodox Christian activist to hold a Bible reading. “The New Testament is the most important book in my life,” she says. “Christianity belongs to us.” Sadly, although she tries to visit churches fairly regularly, she invariably finds herself kicked out of most of them because of what happened in the Moscow Cathedral back in 2012.

Historically, the church has always struggled to call The State out as it becomes more powerful and oppressive. That’s why Pussy Riot performed their punk prayer act of defiance inside the most powerful and most recognised church in Moscow. Yes, Maria has a lot of anger against the Orthodox church hierarchy for what she sees as its misogyny and support for Putin: “The face of the church is a group of thieving officials who are absolutely hypocritical and have nothing in common with Christian morals and morality. These are people who, under the flag of morality, justify war and political murder.”

But Maria was outraged at the charge made against her and her sister protesters – the suggestion that calling on the Virgin Mary to “become a feminist” and “chase Putin out” was a smear against Christianity and somehow blasphemous. Because, in many ways, Pussy Riot’s punk prayer calls to mind a much older story of protest in a holy space – one involving money lenders in the temple.

Please don’t get the idea we’ve just invited a band to play at Greenbelt. Pussy Riot isn’t a band at all. It’s an idea, a collective, a conversation – one in which all those who want to fight for change can take part. Of the three main jailed protagonists back in 2012 after their punk-prayer protest, only Maria remains active from within Russia today. Still facing corporal punishment (whipped while protesting at the 2014 Sochi Winter Olympics) and the threat of arrest and trial (last year for unfurling a banner in support of the imprisoned Ukranian film-maker Oleg Sentsov), this bright thread of Pussy Riot’s lineage is still very much alive and kicking. And she will be with us as part of the collective this summer. 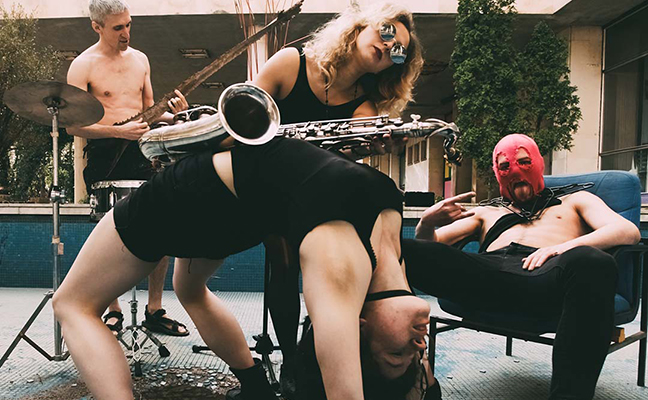 But what of the centrepiece show they will bring to Greenbelt as part of their residency with us over the weekend? Well, as a musical, theatrical interpretation of Maria’s book, Riot Days (written about Pussy Riot’s genesis, trial and incarceration), here’s a couple of review extracts from when the collective toured the show to a few venues last autumn:

“Riot Days was a generous document to defiance, a kinetic invitation to dissent. I left blazing with hope … [It] convinced me that gigs still have the power to move the masses.”
THE GUARDIAN

“Riot Days offers confirmation that both the Punk and protest movements are still very much needed.”
THE ARGUS, Brighton

The book and the show are bombastic, hallucinatory, powerful and often overwhelming – yes. But also disarming, human and funny. Thanks to lines like: “we ate whatever God sent us – which was usually pasta.” As always, laughter proves one of the most effective human weapons in resisting against all the odds.

We are all Pussy Riot

There can be few braver and more notorious arts-activist collectives at work in the world today. And our hope, in having Pussy Riot in residence with us at Greenbelt 2018, is that our imaginations will be inspired and provoked to action, so that we ask: what can we do to effect change and freedom in our lives and in the situations where we find ourselves? We also hope that our celebration of and solidarity with Maria and the crew will encourage and strengthen them to continue their fight for human rights, dignity and freedom on their return to Russia.

Riot Days and Pussy Riot are an inescapable reminder that when any of us remain silent in the face of injustice, we are complicit with it. And that when any of us gives so much as an inch, the powerful will take a mile. In these days of swirling conspiracies and inter-connectedness, where a few egomaniacal men seem to sit atop the world’s agenda – propped on all sides by webs of political, commercial, tech and corporate bolstering – we need to hold true to the rights, dignity and worth of all human beings. That’s what Pussy Riot demand of their own system – and of us all.

In Riot Days, Maria has written a book and devised a show (together with Pussy Riot) that not only tells a compelling story of injustice, inciting our response, but that is also a work of art in its own right. Rather than countering the prose, power and patriarchy of Putin’s Russia with more prose and proposition, Pussy Riot create surprise, events, happenings, space for life – and sometimes even joy – in the face of seemingly desperate circumstances.

Greenbelt has always been a space that seeks to champion, celebrate and stand with those who speak, sing, and act truth to power. We try to be part of that long arc that bends towards justice, part of that movement. Welcoming Pussy Riot this summer will be the latest – and possibly most exciting – thing we’ve ever done in our long history of showcasing faith, arts and justice at the festival.

“I am not the sort of person who sits around waiting for some sort of end,” says Maria Alyokhina. “You have to keep acting, whatever the conditions. I fight against indifference and apathy … and for freedom and choice.”