We live in unprecedented times. And it seems only right that, in spotlighting the concerns we have as a festival around issues like climate emergency, migration, UK poverty and inequality and Israel-Palestine, we have to allow space to talk about what we must consider doing in the face of these overwhelming injustices. Especially when the powers that be and the laws that they make can seem inadequate in the face of the scale and importance of those issues for our shared futures together.

For instance, Greenbelter Andrew Graystone will tell the story at Greenbelt of when he took a simple, seemingly small decision to watch over Muslims in his Manchester community as they went to pray after the Christchurch Mosque shootings in New Zealand. He describes his talk like this:

In April 2019 a young man entered two mosques in New Zealand, killing 52 people and injuring 49 others. That day, armed with a flat cap and a piece of cardboard, Andrew Graystone walked to his local mosque in Manchester to stand guard during Friday prayers. 24 hours later his picture had been shared millions of times and he was bombarded with messages of support from the Prime Minister of New Zealand to Jada Pinkett Smith. 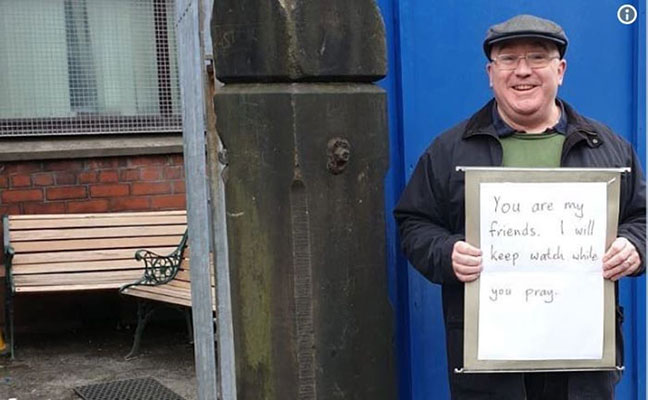 Andrew’s talk sets the tone for a festival that will provoke us all to think about what we can actually do in response to the injustices we face in our community and in our world. (Photo by Zia Salik.)

And Kumi Naidoo, Amnesty International’s CEO will kick the festival off on the Friday with a talk entitled How Civil Disobedience Can Change the World. Kumi himself grew up in apartheid South Africa and was expelled, first from school and then his country, for his anti-apartheid protesting.

On the Monday of the festival we’ll invite a panel of artists, speakers and activists on the bill to debate when and if civil disobedience is ever OK or necessary. We’ll be joined in that conversation by the Bishop of Chelmsford, Stephen Cottrell. Bishop Stephen spoke as a witness in support of the Stansted 15 in court (we’ll also have Mel from the Stansted 15 with us at the festival to tell their story of disobedience).

Greenbelt has always been about creating a space where we can engage with the issues of the day and how we can respond to them – with faithfulness, creativity and generosity of spirit. This year, perhaps more than ever, there’s a lot for us to think about – and act upon.