A guest blog from Ruth Broadway, the Bristol-based illustrator whose prints we’ve used in the visuals for our Acts of the Imagination theme artwork this year.

Last year I was invited to be involved in World Turned Upside Down, an exhibition in Leeds curated by illustrator (and Greenbelter) Si Smith with support from Leeds Inspired. Artists and poets were asked to make work in response to the Beatitudes – the eight statements from the Sermon on the Mount.

Initially I found it hard to see how these words relate to us at this time. They are words that invert our power structures. The opposite of the power-hungry, greedy and ruthless values we often see in the people that run our countries, who don’t seem to consider the meek and those without a voice; the poor, the very young, the sick and the elderly – the most vulnerable in society. This is particularly marked at a time of fallout from Brexit, which seemed to bring out an openness in racial hatred and the USA voting for a person as self-serving and prejudiced as Donald Trump to become their leader – both are shocking and depressing.

Si Smith’s inspiration for the exhibition came from an unlikely source, as he says:

“At Donald Trump’s inauguration ceremony, the Beatitudes were read. That struck me as a truly dissonant moment and – whether deliberate or not – a pretty direct rebuke to the values that he represents. Because whilst we’ve succumbed to the belief that it’s the richest, the strongest and the most powerful who’ll always and inevitably triumph, the message of the Beatitudes is that in the end, it is actually the meek who’ll inherit the earth.”

The idea of re-imagining a world turned on its head is a refreshing starting point for making new work. Using the classic visual style from revolution posters from the past as an influence, I was drawn to the Beatitude about meekness:

Blessed are the meek,
for they shall inherit the earth.

The idea of meekness, or gentleness, being of greater value than power, status and riches is alien in our society, but at the same time I can’t help thinking people need to know the bullies don’t have to always win. 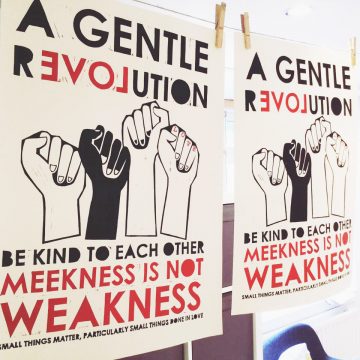 I’ve never considered myself a particularly political person and am naturally quite shy, but last year I felt compelled to join marches and rallies to support change. I am supporting a gentle revolution with kindness at its centre. A world not of greed and power and ego, but a rise in gentleness, thoughtfulness and compassion for our fellow humans. It is important not to confuse gentleness with passiveness or apathy, it is just a different way to communicate – meekness can be very powerful.

I have never made a piece of work that has received responses like this print. I have been encouraged by the passionate and inspiring conversations it has provoked in people of all ages. Some people felt compelled to buy the print to share these values with their family every day. Other people may not have found the print to their aesthetic taste, but have told me that it made them cry. When I hear things like this it makes me feel quite emotional, I think this is due to a feeling of solidarity, the idea that my values resonate with someone else. That maybe we really are having a gentle revolution.

Making this piece of work has made me mindful of the fact that we don’t always have to make big showy gestures to make a difference. The small act I can make each day to show an individual some kindness is equally as powerful and important.

You can order your own copy of Ruth’s Gentle Revolution print here. 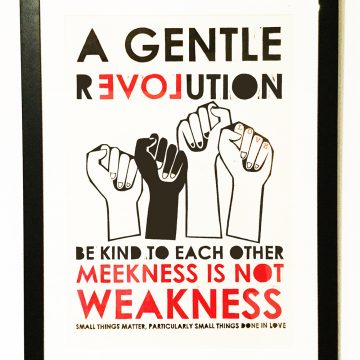